Published by Petron Automation on February 15, 2017

PROSPECT ? Petron Automation Inc. has come a long way since its humble beginnings almost four decades ago, having been named Manufacturer of the Year Friday at the 20th annual Harold Webster Smith Awards.

Mike Petro Sr., a tool maker, and his wife Patricia Petro founded the Watertown company in 1980 in a one-car garage at their home as Petron Automated Machine Products, building specialized machinery for the manufacturing industry.

?Who would have thought that in 1980 when my father Mike Sr. started this business out of one-car garage running secondary machinery and then moving into a 3,000-square-foot rent employing only a handful of people that we would be standing here today?? Mike Petro Jr., the company?s operations manager, said Friday in accepting the award in front of about 230 people at the awards ceremony.

The annual awards breakfast was held at the Aria Wedding and Banquet Facility in honor of Harold Webster Smith, founder of Webster Bank as First Federal Savings of Waterbury in 1935. The Waterbury Regional Chamber?s Small Business Council organized the event, at which awards are given for Small Business of the Year, Entrepreneur of the Year and Manufacturer of the Year, every year since 1998.

Largay Travel Inc., of Waterbury was named Small Business of the Year.

Daniel Sanchez, owner of Onyx II Fine Jewelers at in Watertown, received the Entrepreneur of the Year Award.

In 1981 Petron Automation moved the family-run business, which has made high-precision parts for numerous industries, including aerospace, automotive and electronics, into a 3,000-square-foot shop on New Wood Road. In 1992, they built a 7,500-square-foot plant at 65 Mountain View Drive in Watertown.

?I always thought I had the talents to do something better, so I talked it over with my wife,? Mike Petro Sr., 75, company president, said of starting the company recently while at the plant with his son Mike Petro Jr. ?The overhead was non-existent while doing it in a garage.?

Mike Petro Jr., 45, said the company added another 9,000 square feet to the factory a few years ago with help from a state loan to bring in several more Torno Swiss-type CNC routers that run 24 hours a day. He said the plant now has 22 Torno machines valued from $200,000 to $800,000 each and other equipment throughout its 17,000-square-foot plant with pristine concrete floors, white walls and high ceilings.

?By adding the technology, we?re able to compete in the global market, which brings in more business,? he said, adding Petron was ISO-certified 18 months ago to make medical parts. ?There?s constantly growth in the medical industry, and that?s something we strived for over the past few years.?

He said medical parts sales constitute about 40 percent of the company?s business.

?Business was going through the roof,? he said of the need to grow the business. ?Either you don?t take the work, or you expand.?

Posted in Latest News
← Previous Next → 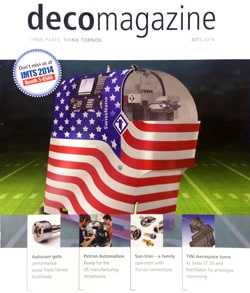 View our article in the DecoMagazine